Is Z-Wave SmartStart supported by Homey

I just bought a couple of new Z-Wave devices that according to the manual support Z-Wave smart start. I am currently not able to include the devices using the Neo Coolcam app which did work for older devices. Does anyone know if Homey supports SmartStart for inclusion of is that something that the app needs to implement?

As far I know, SmartStart requires S2 Security.
And Homey doesn’t support S2 Security.
Whether S2 Security support is planned, for that you have to ask Athom directly.

For me, smart start is what I do with my Qubino devices:
1 Remove the power from the device that you want to include for at least 3 minutes
2 Set Homey in the include mode (devices/ + /Homey/Z-Wave - install
3 When Homey is telling to put the device in learning-mode, then put power to the device (close to Homey <30cm), and it will be included.

Smart start is indeed partially that it is no longer needed to trigger the inclusion for the device side, but after power-on of the device, the device is accepting inclusion commands from the controller. This part is not linked to S2 security and is this supported by Homey.

The second part is related to S2 security and is the ability to start the inclusion process securely by entering the Device Specific Key (DSK), often a QR code. Where from a user friendly interface, the end user is able to scan the DSK of the device and start the inclusion process securely (instead of the S0 secure inclusion that starts unsecure until the exchange of keys). This part is S2 related and is not supported by Homey!

Smart start is indeed partially that it is no longer needed to trigger the inclusion for the device side, but after power-on of the device, the device is accepting inclusion commands from the controller. This part is not linked to S2 security and is this supported by Homey.

Works this also with the new kind of Inclusion Process that was introduced months ago by Athom?

I just checked the documentation, the device does not support S0 security, only S2. Are there any workarrounds that I could use, or is Athom planning to include S2 security in the near future? This is really not good. I cannot get the old wall switches anymore and just bought 20 of the new ones which now seem to be unsuable,

About what kind of devices you are speaking about? Is there a Homey App available for this device?

They still should be able to be included in the old way.
There are many S2 devices that can be used with Homey, except not with S2 security.

Like @Osorkon asked, what type of devices are you referring to?

These are Neo Coolcam devices, for which there is a Homey app available. I have used the app succesfully for the older switches. With the new ones I was not able to include them through this app.

based on what you wrote about S2, I hoped that it would be possible to include the device after all. I tried using the Neo Coolcam app and as a generic ZWave device neither worked

The existence of an APP alone is not enough.
The app must also support the respective devices.

If the device is missing, it will be included as a generic Z-Wave device.

In this case you can ask the App developer to add the missing devices.

I realize that the app needs to support the specific device, but as you say, as fall bac, it should be included as a generic Z-wave device. That also does not happen.

What is the distance between Homey and the Device during the Inclusion process?

Inclusion doesn’t work; I haven’t been able to try exclusion :-). I had the Homey at a distance of 10 cm.

By the way with the old switches, I could just let the Homey where it was; distance didn’t seem to matter that much.

I haven’t been able to try exclusion :-

If you add a new Z-Wave device, the process is divided in two Steps. (It’s new since a couple of month)
1 Exclusion
2 Inclusion 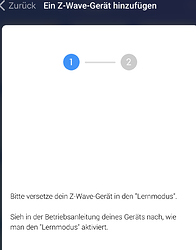 Which Homey Version are you running?

I got to the page that you are showing and get stuck there. I put my device in “learn mode” and wait and nothing happens.

Just to be on the save side the “learn mode” is the mode that you put the device in to be included in the Z-Wave network. For my switches that is three rapid clicks

Maybe there are different instruction to start an Exclusion and to start an Inclusion.
But usually it’s the same.

Last time a tried to include a Fibaro RS3 I need 100 attempts before I was successful.