Unfortunately I have been a bit occupied the last couple of days. I’m letting the test versions install automatically, this happened two days ago. I have a couple of 1pm , dimmer 2 and 2.5 and ove motion. All work just fine. Haven’t noticed any issues and none of the kids or wife have complained. Just did some on off and dimming testing and works as reliable as ever. Will be installing a new dimmer 2 later today. Which makes that a newly added device compared to all other. Will keep you posted. Any other specific things you want to see tested?

Pro user here btw. And good luck with the shitstorm. Maybe you can notify Emile to block the reviews temporarily on the app page?

For some reason the I4 plus doesn’t react the same as the I3’s.

The flows aren’t started with “actie / gebeurtenis”, this works fine with the I3’s.

Something to check with the next update?

Shelly i4 supposedly has 3 possible actions per channel, most likely “click”, double-click, and long-click.
In the app flows for the i4 I see that the only triggers are “changed” “off” and “on”. Am I missing something in how those can be implemented? If not, any chance the others triggers could be implemented as well?
Many thanks!

Read the first post of this topic. You need to use a app level flow action card.

Ah, sorry, made a mental notice to remember to use that when I will need it, especially since I already use it for buttons, but seems mental notes don’t work as expected. Thanks for you patience

Release 3.8.1 that has just been published to the app store contains a breaking change for all Homey Beta / Cloud users. The way cloud support has initially been added after the launch of Homey Beta / Cloud has turned out to be not the most desirable and sustainable implementation. Therefor this integration has been rewritten. Unfortunately this requires all Homey Beta / Cloud connected Shelly devices to be removed and paired again and thus will break your flows. Without it you wont be able to control these devices. Due to the rewrite and the fact no one responsed to my earlier request to test the new cloud integration it could very well be there are also bugs to iron out. Sorry for the inconvenience.

I just want to understand; I have a homey pro. Just updated to 3.8.1. This issue should not affect me, but I removed a Shelly 1, and am unable to add it to homey.

It has a static ip, works with the Shelly app etc. But it will not add in Homey.

Edit: maybe I misunderstood… none of my Shelly’s are available in homey. All with red exclamation.

It has a static ip, works with the Shelly app etc. But it will not add in Homey.

Could you be more specific than “it will not add”. What error is shown?

Edit: maybe I misunderstood… none of my Shelly’s are available in homey. All with red exclamation.

What error is shown when you longpress a device. And feel free to send me a diagnostic report, perhaps that tells me more.

Thank you for your reply. When I add I get the error in the picture.

All the others have magically started working again. I never in de past have had any issues with Shelly and homey. So this is weird. My WiFi is 99,99%.

As the error says Homey cant reach this Shelly. There are numerous possible reasons for this. Even the network stack of Homey which seems to be unstable at times for some users. See the first post in this topic for troubleshooting network issues.

I’ll try it. Thank you for your reply.

Hi, with the i3 that is working fine, but for some reason that doesn’t work for the i4’s.

Shelly i4 supposedly has 3 possible actions per channel, most likely “click”, double-click, and long-click.

Hi, with the i3 that is working fine, but for some reason that doesn’t work for the i4’s.

It’s a bug which I’ll try to fix with the next release.

Thanks for checking this out. Keep up the good work, love the Shelly intergration.

I can also confirm the report from @Koekwaus and I am patiently waiting for the fix, thanks for the effort.

In the meantime it may be worth mentioning that when using the app level flows I can only see the items for the first 3 channels. See pic.
The list has Short Push / Long Push / Double Short Push / Triple Short push for 1/2/3, but after that there are another 6 lines of blank options.

I have an issue with version 3.8.1 and adding a TRV to homey… I receive this message: 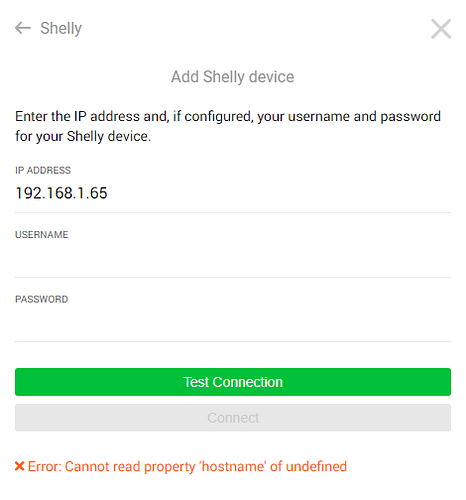 Any ideas? (the trv works fine in the shelly ios app)

I’m getting the same error message when adding Shelly 3EM.

I have an issue with version 3.8.1 and adding a TRV to homey… I receive this message:

I’m getting the same error message when adding Shelly 3EM.

I’ll look into this but you should not have to manually pair your device in general. If the device is not discovered there is probably something else which need fixing most likely something in your network.

How does the Shelly App discover Shelly Devices? Some broadcast protocol?

I’m running a Google Wifi network at home, there is a very limited number of settings I change (unfortunately)