I see a 5016 kWh reading in PBTH. But your BMS screen doesnt show a kWh reading. So where is this coming from?
Are you maybe setting readings manually or via flow?

I know I must be doing something wrong ……

All screenshots taken within 60 seconds of each other 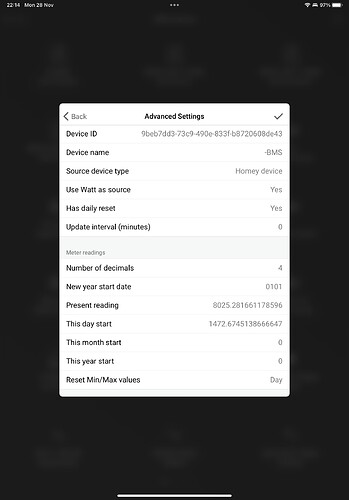 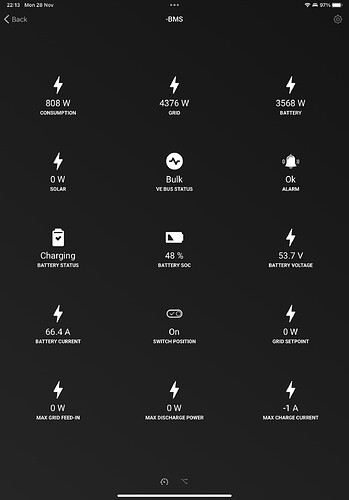 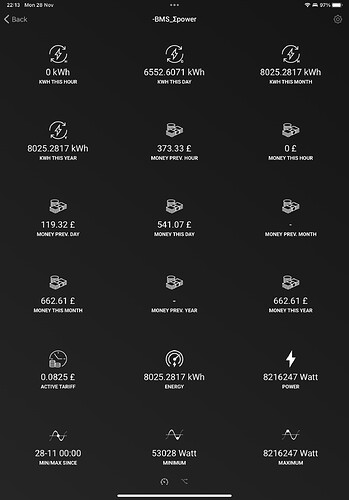 You have enabled ‘has daily reset’. Switch that to ‘off’. Shouldnt make a difference since you use ‘Watt as source’.
And that is the second issue. Which of the four BMD Watt meters is used by PBTH? You can ask the BMD developer which one is using ‘meter_power’ as capability, because that is the one that PBTH takes.
Then thirdly, even when an incorrect Watt meter is used I dont know why you get these huge Watt values in PBTH (8 million watts as peak!). Doesnt make sense to me at all…

Switched ‘has daily reset’ to off

2nd issue -
of the four we can rule out Solar as that is a constant 0 - no PVs
Is it possible that PBTH is pulling from ALL three - Grid/Battery/Consumption and adding them all together? Because a daily Elec bill of £127.88 would be excessive - an elec bill of £1.60 would be more likely.

I will ask the developer on their Github page to make meter_power the default to enable actual energy into the house rather than consumption, ie they charge for energy coming in not for how much of it you use that day.

My household supply max is 80A, fuse will blow at 120A so not using 8 mWh peak

A thought PBTH is reporting my usage today as 1544.2661 kWH - I could believe 15.44kWh is it possible sometihng happening around Watts/kW in PBTH?

possible that PBTH is pulling from ALL three

No. It will only listen to measure_power

Sorry, In your case I meant to say measure_power. Meter_power is for kWh meters, and I dont see any kWh meters in BMS.

Nope. PBTH takes the same value as provided by the source device.

Can you maybe share a screenshot of the Insights of the last 24hrs of the BMS watts? Are there maybe huge peaks there?

Thanks for you help here, much appreciated. 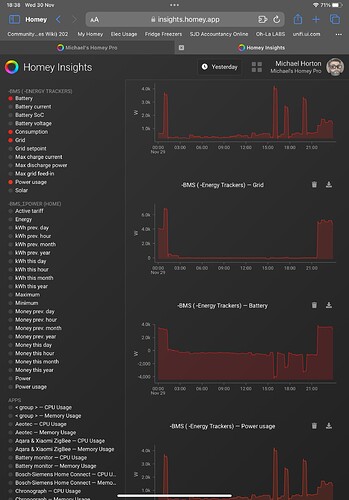 Don’t fuss over this, it would be great if it worked, but I can play with going direct through the api, or try something with Node Red.

It’s a nice to have…

Hi! Is the solar panel app Good we inverter supported by PBTH?

Dont know. Just try and let us all know

Hi @gruijter I noticed that for WHEN flow New prices received for tomorrow triggers but still the tomorrow prices are not shown yet. And so we get [null] value in the message. The time corresponds to when prices are publicished but not loaded in app yet. 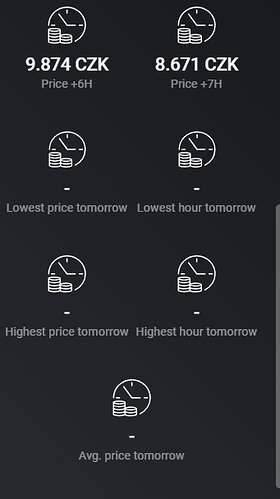 Still can you please check my previous post about the flow The price become one of _ highest/lowest for today? Many thanx for explanantion.

). I recieved mine some hours ago and started to see what I could do with it in combination with PBTH. Here are my very first 2 applications I created. 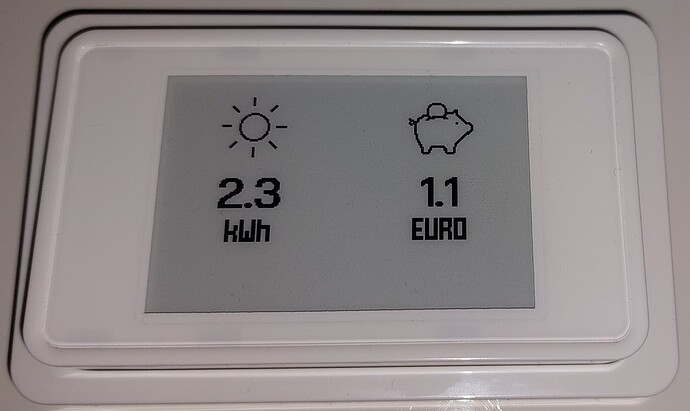 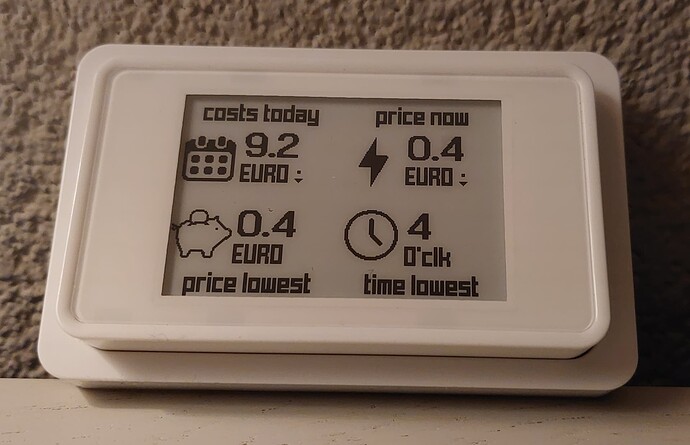 I set the display update to once a minute (which is the fastest possible update). To save batteries I could maybe lower the update interval to 10 minutes, and completely pause updates during the night.

I will try to think of some other use cases. Or maybe you all can come up with nice PBTH uses of the display. [APP][Pro] smpl products - Battery powered e-ink display

Dang… 21 euro energy used today (and the day is not over yet). That would be 650 euro this month if the temperature stays around freezing point 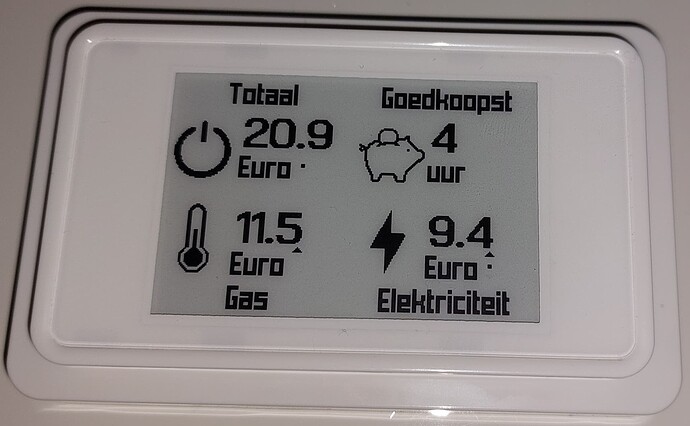 New test version 4.8.3 is available: Power by the Hour | Homey

I hope this solves the issue of people using Watts as Source, where the PBTH usage ever increases even when the source device is off. See the Github bug report here: kWh increasing while device is not consuming power · Issue #67 · gruijter/com.gruijter.powerhour · GitHub

I did find something and made appropriate changes, but I cannot easily test it myself.
@Busta999 maybe this solves your issue as well, but I have doubts about that.

What is the data source you are using? Eg. CEPS show up for me everytime…

When the new prices card is triggered only the tag that comes with the card is immediately available. All other values you try to use will not be available before the next whole hour.

The first was requested as feature: [APP][Pro] Power by the Hour [Feature Requests] - #60 by JeeHaa

The second is a fix for a long standing bug that corrupts historic meter values when migrating capabilities to a new app version.

I will wait for feedback from the testers before promoting 4.9.0 to stable release.

I notice that the daily amount of energy for electricity is exactly the same as stated by my supplier, but for gas it differs every day. Any idea what could be causing this? So it concerns # kWh and m3.

gas it differs every day

It could differ a bit depending when and how often your gasmeter is providing the data. I have an old meter that only gives its meter value once an hour, and does that 10 minutes past the hour.

Homey takes the meter value exactly at midnight as close of day. But if you used gas between 23 and 24hrs, and that gets reported some minutes after midnight, it might be that your energy supplier has a slightly different day value.

That makes sense. I will check later this month over several days, the difference should be minimal.

Is it possible to include monthly negative fixed costs? And do the fixed costs per month include or exclude VAT?

Yes, in the advanced settings of the summarizer

fixed costs per month include or exclude VAT

PBTH simply adds the value you enter at the start of the month.