First, I would like to thank Lennart Kuijs for making this app many years ago. I have found it extremely useful and it inspired me to write some of my own apps. However, Lennart no longer has the spare time to maintain the app, so he has handed the reins over to me.

I hope to bring the app up to date with Athoms and Node.js latest standards plus add support for new devices that users have connected to their hub.

I have released my first version of the app to the Athom store at version 2.0.0 to make it easier to see the transition point.
This version has support for new devices plus it uses a more modern communication library that is smaller and faster.

The app currently supports over 100 different devices including:

Getting Started
Once you have installed the app you can start adding devices. The first time you add a device you will need to enter your Somfy username and password to connect to your Somfy account.

The app uses polling to fetch device status information. It is recommended that you keep the default polling interval of 30 seconds. The app will automatically boost this to 3 seconds during the control phase of a device to get status updates.

Requesting new features / devices
On the Homey Pro, there is a features that makes it easier to collect the information required for new devices and locate any problems. These features are found in the Apps section for the Somfy Tahoma & Connexoon app by taping on the Configure Application,

The main feature there is the Device Log tab.

This is where you can gather the information form your system that contains the data I need to add new devices. I have been very careful to ensure that any personal information has been removed so it is safe to post the information.

To capture the data, tap on the Get Log button and wait for the list below it to fill with data.
Then copy the data from the list box and send it to me in a PM on here.
There is also a Send Log button that emails the data you see directly to me, however the information I receive dose not identify you so I will not be able to reply. Therefore, please follow up with a message on here or in GitHub (Issues · AdyRock/com.somfy.tahoma · GitHub)
The main advantage of sending me the log is I can feed that back in to a simulator page which allows me to do some basic testing.

You will also see the Information tab here. If you are having problems with the app then switch Information the on (blue tick), wait for a few minutes until the problem has occurred and the log has gathered some data and then tap on the Send Log button to send the information to me.

Device Settings
Another feature that I have just added to version 2.0.2 is the option to reverse the direction of the controls. This is per device and is access by taping on the gear in the top right corner of the device screens and then tap on Advanced Settings.

The Invert Up / Down settings changes the direction of the Up / Stop / Down buttons so I you covers move up when you press down and down when you press up then toggle this option. This also changes the flows so they match the buttons.

The Invert Position setting changes the direction of the slider control and the move to position flow cards.

If you have any requests for new features or have found a bug please let me know by either a PM, posting below or create an issue on GitHub. I will do my best to help you but please remember I do this in my spare time for fun so I might not be able to respond straight away.

Updates
One of the new features is the tile goes dark when the covers are closed and taping on the tile moves the cover to the opposite position to provide quick open / close control.

Version 2.0.9 * Added more logging for the events to try and see why they are not working.

Version 2.1.4
*Added a flow card to switch the polling on and off.

Please report any problems via PM on here

Another feature that I have just added to version 2.0.2 is the option to reverse the direction of the controls

Tested on 2.0.2 and works! Really nice app and glad you are there to maintain it.

For my screens the invertion is great.
It works great for invert position.
But, the invert up/down does not do anything.

But, thank you for your effort.
Great work!

invert up/down does not do anything

I tested invert up/down with IO roller shutters (quiet) and that works. Maybe you can mention what kind of screens you have, so Adrian can have a look.

He already knows.
We have talked-about this.
And i send him my devices logfile.
I only put it here so everybody knows it is work in progress.

This fixes an issue with the reverse direction of Up / Down buttons option. When I discovered the refresh token bug, that could prevent users accessing their devices, I rushed the update with that fix in. Unfortunately, I hadn’t finished testing the reverse option.

It also has an option to invert the logic of the tile action / display.

As I don’t have the devices required to fully verify these reverse features I will leave this version in test until I get confirmation that it is working.

I just want to apologise for the access token issue, in version 2.0.0. Obviously it’s not the best start and very embarrassing.

The problem occurred if a new access token was required when sending an action command.
As the app spends most of its time polling for information, which could refresh the token correctly, and a token last for many hours, so the odds of it failing were low. Therefore it only showed up once more users started to use the app and more specifically, users that have more flows controlling devices were more likely to come across it.

I would like to thank the users that provided information about the problem that help me track down the cause and fix it quickly.

With my equipment everything works now.
These last changes did the trick for me!

Hi Adrian, after the day with 2.0.0. test app I recognized problem with my flows. It triggers correct. But the scenario wont run. If I look into the flow card, but there is only circle turning and never get the green

i have relogin tahoma credentials, i have restarted app.

If by live icons you mean displaying values on the tiles then there’s nothing I can do about that as Athom decided what is displayed there. So a thermostat will show temperature setpoint, alarms will show a !, etc.

Sorry about the late reply above. I had written the the message but forgot to press send.

I haven’t looked at scenarios at all as I don’t use them so I will need to investigate. It’s possibly the change to axios has broken something.

I have been playing with scenarios this morning and they seem to be working fine for me.
Could you have a look in the app - Configure app - Error Log tab to see if any errors are being generated?
Do your scenarios take a long time to run?

Hi, i am getting bunch of these. In my house I use quite advanced blinds automation and i hope it could be resolved. I will try to create new flow to se if its only problem for old flows when migrated to 2.0.0.

I tested more. I created new flow and it worked. After i again tested the old ones and now started work. I will let you know if the problem comes back.

EDIT: only after few minutes the scenarios again do not run

even the newly created.

Very strange. The flows I created this morning are still working. One of them runs two scenarios, close upstairs blinds and close downstairs blinds. Then I have two other flows to run the scenarios to open the blinds again.
When I run the flows the tick comes up straight away but Tahoma runs the scenarios sequentially. So the second scenario doesn’t run on tahoma until the first one has finished.
If I press the test button several times, I still get the tick every time but Tahoma queues them up. My poor blinds don’t know what is going on

If you go back to v1.6.24 in the community store (prior to the axios update) do you have the problem?
If you clear the error log, do the errors come back when you have problems with the flows?

I rolled back to 1.6.24 and working. Updated to 1.6.25 working and now from official store 2.0.0. working. No error so far. Will let you know if problem comes back. Many thanks for your support.

@Adrian_Rockall
Can you check the ‘position’ code of IO horizontal awnings, I read on Facebook that someone did the update to 2.0.0 and the position is reversed. 100% is closed and 0% is open, this should be the opposite.

So in his case his horizontal awnings went open, when it started to rain (flow) 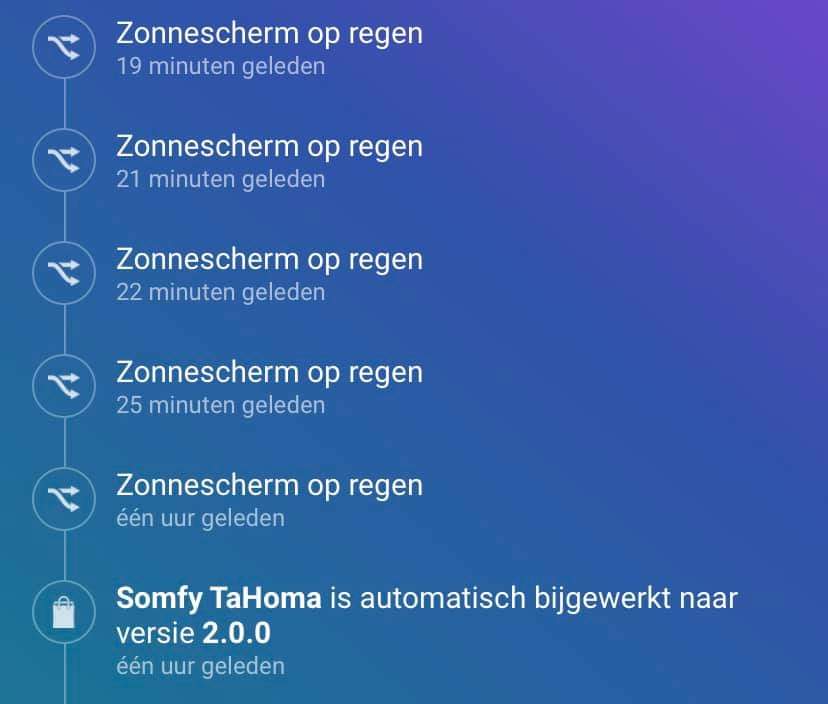 Since the update my roller blinds connected to a connexoon don’t work at all anymore.
I use io roller blinds
Any possibility to downgrade the app?

Since the Somfy app doesn’t work with ios 14, I have no more ways to use the rollerblinds… 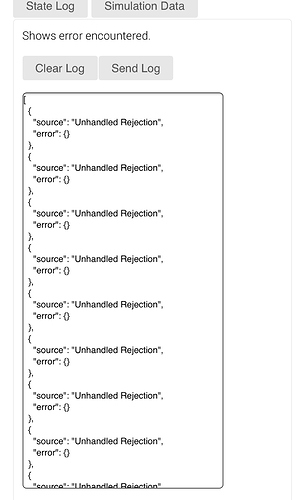 I use io roller blinds

Do you have IO roller shutters with the option to move in slow speed (discrete mode). If so then probably you have to re-add the devices as roller shutter quiet instead of the normal one.

Ok loging out and in again and re-adding my blinds did the trick.
Maybe because the names don’t match?

Anyway it works, I only have to modify all the flows again

I might have found the issue causing those errors. It seems that if the token expires at a certain point then the check was still using an old variable that I had missed during the change to axios.
I will publish a test version very soon.