Heatit Z-Push button-8. Unable to add the device to Homey. Only added as generic zwave device. Homey version 7.2.1. Is there a fix for this? 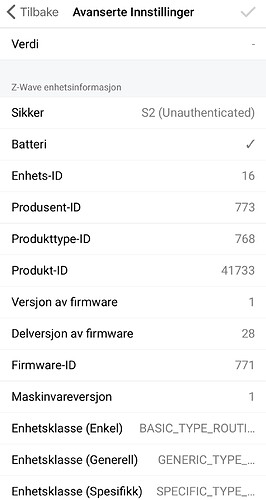 Any updates from your tests for the problem with inclution of device with fw 1.92?

Hi, I have 5 pcs Z-TRM2fx that can no longer be connected to homey pro. After working well for over a year, they have stopped working and I removed them to add them again, but it is not possible. Is it so that this can not be repaired, and I have to ask to be sent new devices?
I have a Z-TRM3 that still works.

It sees like an user above had to exchance the device? Or is it possible to fix by software?

@HeatitControlsAB I opened an issue on the Git repository the other day and now it seems that the repository is removed from Git, why?
Anyway I have the same issue as previously mentioned by @Automansion and Espen_Werner where there is no temperature from the temp sensor and the food sensor does not react when there is water on the sensor.

I have found a workaround to get heatit thermostats with firmware 1.92 to include with some help from some great people at homey community slack. You have to download a app from Homey Community Store

The problem is with the inclusion with unsecure device on homey… After installation of the community app and Unz-cure from the link. You should select unz-cure when you add the thermostat it will be included like it should. Dont forget to have heatit app also installed so it will find the device tru that.

Hi - two of my ZTRM3s are showing negative floor temperature - is there anything that can be done to fix this?

@HeatitControlsAB I still cant see the temperature on the sensors on with the z-relay unit. Is there a stus on a fix for this?

I got my Z-Relay working with some help from Heatit support.
Temp input 1, energy and power works, but still no voltage or current.

I had to re-add my Z-Relay without S2 (Use 00000 as PIN) and tell told me to change my group association to 1.1 on group 1 and leave the rest blank. BUT, it worked with just leaving every setting as is.
Just enable the input 1 sensor, and it worked.

I have a Z-TRM3 that I’m unable to add to Homey at all. I was able to add it once. But tried to remove and re-add it after it was having 60% TX error rate, now it won’t pair at all. Even as the sole Z-wave device and having the Homey 2cm away from the thermostat.

Have you tried to completely cut the power, or done a factory reset? That helped me a couple of times.

Tried cutting the power yeah. Do you mean a factory reset of the thermostat or Homey? I also tried a reset of te Z-wave network to no avail.

Edit: Did a factor reset of the thermostat. Was able to add it again. Thanks.

Hellow. I hav your smart smoe detectors. They work fine, but report wrong temp. Can ypou make a software solution to calibrate them? Should be an easy fix.

@HeatitControlsAB
I´m having trouble adding the z-push 8 to homey. I´m getting an error-message saying that the app is not compatible. I´m guessing this is software related. Is there a quickfix? Are you aware of this and are you planning a bug-fix?

Hello @HeatitControlsAB ,
I purchased 4x Heatit ZM thermostats and to my surprise i can’t pair them with homey. - there is no support for it. Can this be added to the Heat-it app?

I have the same problem. Installed 5 thermostats, and now 2 weeks later, 2 of them cant be reached. Tried disconnecting power and restarting app/Homey. It just wont work.
Mine showed voltages and current, but now they are both just stuck.
Locked up with around 1 day between them.

Did anybody find out what needs to be done, or why this happens?

In my experience, when this happens it does indeed not help to cycle power or restart Homey. The only way is to remove the device from Homey, factory reset the Heatit hardware, and add it back from scratch. Then you of course have to edit all your flows containg the device you removed, since it is now a “new” device. This hassle makes the hardware rather useless to me, given that the Z-Relay fails repeatedly in this way within 2-5 days or so after a reset.

We need a proper answer from Heatit. If the answer is to upgrade the devices, that’s another problem, as that would seem to require buying the costly Heatit bridge.

There was a suggestion to use an app to add the devices in a lower security mode, might be worth trying: [APP][Pro] Heatit Controls app [v3.0.2] - #158 by Peter_Johansson

Though I don’t feel happy about reducing security on high power devices, I haven’t yet looked into how much security would be reduced.

Where can I download the zip file of this app?

It is nowhere to be found on github

We received some unofficial code from Homey and was asked to not have the code public.

Sorry for the inconvenience.