Thank you, Athom devs, for responding so quickly and that you solved it so fast!

Around 15:00, Signify (the manufacturer of Philips Hue) made an unannounced change to their webservers. Homey Pro uses their servers to discover your Hue Bridge’s local network address. Their server started responding with errors that Homey Pro was asking too often what the Hue Bridge’s local IP was (rate limiting).

We quickly saw this happening and pushed an update to the Philips Hue app to query the servers less often. We were still in the dark how often was allowed, because Signify didn’t announce this change.

Our update (once every 1 minute → once every 5 minutes) worked, so we shipped it instantly. However — what we didn’t account for was that the IP addresses of the Homeys were already blacklisted due to the previous version of the app asking every minute! And once Homey installed the new version, it asked the server again for the Hue Bridge’s LAN IP address… which was then rate limited. Ouch!

Of course we contacted Signify, but they weren’t able to resolve this in time on their end. To be fair, it was already around 22:00. Within 24 hours all blacklisted IP addresses would expire, so all we could do was wait… Luckily, by now everything is back to normal.

Now, why does Homey Pro rely on their cloud servers for a local device? That’s a great question! Using their cloud servers was the only reliable way of finding the Hue Bridge Gen. 1 (which we have supported for much longer than Signify themselves did!). Therefore we didn’t immediately switch to their new local discovery protocol, because it would break functionality for existing gen. 1 bridge users. And we always try to avoid breaking someone’s smart home.

Still, it’s no excuse both discovery methods (cloud & local) couldn’t work side by side. Which we have just implemented in the new test version of the Philips Hue app. We know Homey Pro users expect their devices to work without internet and we wholeheartedly agree!

Thank you for your enthusiasm and faith in Homey.
Only together can we make smart home better!

Does this update mean that Homey en HUE Bridge Gen 2 still been connected when the local internet is down?

If not this update then the next. It will break gen 1 connections but improve gen 2

It will break gen 1 connections

Somewhere on this forum Emilie comments and I’m sure he says that their goodwill may have to come to an end on that score. If I’m wrong great for those with old kit

I just don’t understand some things that are being said:

Also, plenty of home automation platforms still support the v1 bridge, so it’s a choice to support the device or not. There isn’t a technical reason support has to cease.

I have a problem with my Homey pro and Hue. I have three Hue bridges with different scenes. In the flow chart I can find scenes from two of the bridges, but not the third one. Have updated the bridge and rebooted bridge and homey. Do anyone have a suggestion what could be wrong? Scenes from the other two bridges works fine.

Can you add the Hue Tap Dial please?

Questions via the forum will not be answered by Athom people.
Please send this question to Athom (support@athom.com) to add the Dial Tap
Then you’ll get an answer from support.

Questions via the forum will not be answered by Athom people.

Unless they have a new toy like Advanced Flow, then the forum is suddenly the place to ask them questions

Did you get an answer yet? I do have Tap Dial too and would like to use them for my Sonos.
Or is there probably a workaround to get them work? 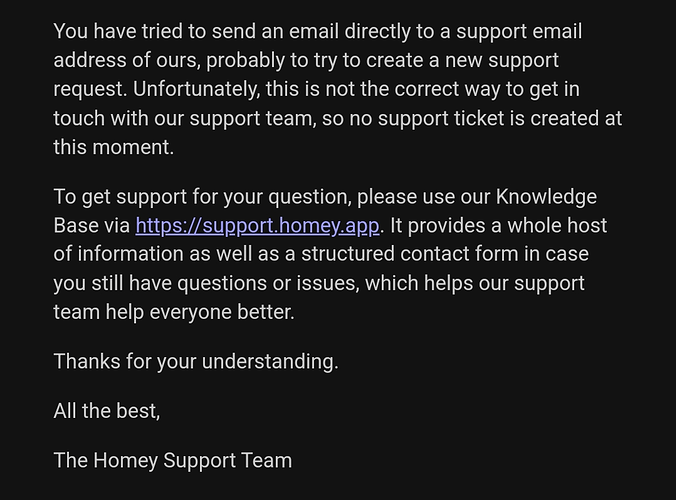 Who else has the problem that colors set by the hue app on a phone are not correctly shown in the homey app??

Looks like that the homey app/desktop not shows rgb colors set by a different app.
Only the color temperature is working right.

Are they available in the philips hue app? (the not homey related app but the hue bridge app)

Did you change anything to the sensors via the philips hue app?

Rebooting homey did the trick